The war years mark Beaumont's most prolific period. He painted a vast number of ship portraits and battle scenes as an Artist Correspondent and he worked tirelessly to raise funds for British and American war relief agencies. He created posters supporting War Bond campaigns which were published all across the United States. Now quite famous, throughout the war he continued to work on a freelance basis and on direct assignments for the Department of the Navy. At the same time, he continued to create paintings for the many naval officers and private collectors who sought to purchase his works.

In 1939, after the outbreak of war in Europe, and prior to the United States’ entry into the war, Beau was retained by the William Randolph Hearst to create images to accompany Hearst’s newspaper’s stories of the battles raging across Europe. He was commissioned as a journalist-illustrator to depict the trauma of the scenes of European conflict to be published nationwide in the vast syndicate of Hearst newspapers. The news stories were received from Europe by teletype in the Hearst editorial offices. There were no images to accompany the dramatic stories as the photographs could not be transmitted by wire at that time. Hearst arranged for a motorcycle messenger service to deliver the teletype stories of the action to Beau in his studio in Los Angeles. Beau would study the text of the message carefully, and then, with his imagination, create a composition in the form of an ink painting that recreated the scene described. These black and white pen and ink images were then rushed back to the newspaper, photographed, and then reproduced alongside the story as it appeared on the front page. From mid-1939 until the Japanese attack on Pearl Harbor in December of 1941, Beau created 125 black and white paintings which were then transmitted throughout the nation through the Hearst syndicate newspapers. The newspaper stories included both at sea battles and engagements on land. Two of the most shocking stories depicted the British Army’s desperate Evacuation from Dunkirk and the subsequent Fall of France as Hitler’s Nazi troops marched down the Champs Elysee.

These battle illustrations graphically demonstrated to American readers the horrors of what was occurring as the Nazi’s armies swept across the Continent and threatened Great Britain. One of Beau’s ink paintings shows two German Raiders - Deutschland and Emden, in the process of sinking a British freighter, while other images showed the mighty British Battle Cruiser HMS Hood, setting out to sea in the company of the HMS Repulse. And just a few days later another Beaumont image depicts the German Battleship Bismarck’s stunning attack on the Hood, successfully sinking the greatest ship in the British Navy. And still another image portrays the British retribution for the sinking of the Hood as the Bismarck, in turn, is trapped and sunk by the British fleet. These images were powerful reminders for the American public of the ravages of war.

America’s isolationist policies were a disappointment to Beau as he received news from his family in England about the German bombings of London and elsewhere. And while studying at the Slade School of Art in London in the 1920’s, he was devastated to discover that nearly all of his boyhood friends in England had been killed in the conflagration. Therefore, Beau vowed to become an artist activist, and he took a very personal interest in assisting the British war effort, prior to the involvement of the United States. Teaming up with the well-known British film actor Montagu Love in 1940, and a group of Hollywood expatriates, Beau organized the Artists and Sculptors Benefit for British War Relief. A Gala fund raising event was held in Los Angeles, and works by fifty prominent Southern California were donated for the event. The Gala was held at the Hollywood Athletic Club, with many famous Hollywood personalities in attendance. The event was widely publicized, and the auction was successful in raising significant funds for the British and American War Relief Fund.

In the year prior to the Japanese attack on Pearl Harbor, the National Geographic Magazine commissioned Beau to create a series of eight large watercolor paintings with the intent of publishing them in the September, 1941 issue. The series was entitled, "Ships That Guard Our Ocean Ramparts." It was designed to draw public attention to the need for a strong US Navy for the defense of the country. After the issue was released, the paintings were widely reproduced in newspapers throughout the country. The National Geographic sponsored a national tour featuring the original paintings – the timing of which happened to coincide with the Japanese attack on Pearl Harbor. Several of the ships that Beau had included in the Navy series were either destroyed or badly damaged in the Pearl Harbor attack.

And, in the days just preceding the December, 7 Th attack, Beau had commenced a second assignment for National Geographic, jointly sponsored by the War Department. He had been commissioned to capture all aspects of the US Army’s various operating units. When Beau arrived to observe Army maneuvers on location in the Southeast United States, the Army was already operating on a full war alert. Beau was able to observe and sketch Army war game maneuvers simulating actual battle conditions with arrangements approved by generals, Patton and Eisenhower. Shortly after his meeting with the generals, Beau was offered the rank of major, if he would accept the position as the Official Artist for the United States Army. Beau was flattered by the unexpected offer and he gave it serious consideration. But in the end, with the advice of Admiral Chester Nimitz, he chose to remain with the Navy as the Official Artist of the Fleet. The 16 paintings he created for the Army appeared in the September, 1942 issue of the National Geographic. It was the only series of Army paintings that he would create during his long career. With this additional publicity, Beau had become the most prominent military artist in the United States. 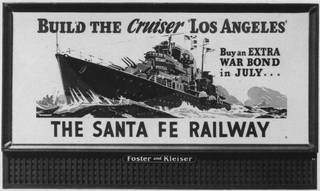 Billboard showing artist's rendition of the USS Los Angeles
In mid 1942, the Los Angeles Evening Herald and Express proclaimed, "Every purchaser of an extra war bond during the $40,000,000 July campaign will receive an original lithograph print of the new fighting ship drawn by America's foremost military artist, Arthur Beaumont!" Beau's images of the USS Los Angeles appeared in countless advertisements, on posters and billboards displayed throughout Los Angeles County.
Beau was one of the principal organizers of the War Bond fundraising drive to build the cruiser, and the campaign was hugely successful. When the final tally was complete, a total of $80,371,372 had been raised!

The Navy department was so pleased by the success of the Bond drive that it decided to enlarge the ship from the proposed light cruiser to a much larger heavy cruiser. And, the excess funds raised were used to build for four Destroyers, as well. 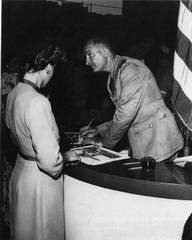 The artist signing lithographs of the cruiser.  USS Los Angeles, 1943.
Subsequently, in 1947, as a reward for achieving success with the War Bond drive, Beau was commissioned by the Mayor and the City Council to paint a large oil painting of the USS Los Angeles for permanent display in entry to the Los Angeles City Hall. Sadly, some 25 years later, the painting would be cut out of its frame and stolen from the rotunda of the City Hall. The painting has never been recovered. During the war years, Beau continued to paint on special assignments from the Navy Department. And, as a freelance artist, he continued to paint ship portraits and battle scenes of most of the capital ships of the largest Navy the world had ever seen. And throughout the war years his paintings continued to be exhibited in Navy and civilian venues all across America.

In all, more than 1000 refined studio works of naval subjects were created during his lengthy career, with his trademark watercolors dominating as his favorite medium.
At war's end in September of 1945, Beau was awarded a Certificate of Appreciation by California’s Governor Earl Warren. He was honored for his voluntary work while a member of the California State Naval Guard, along with numerous other commendations for his journalistic and artistic contributions to the war effort.