In the years after World War II, Beau's Navy work continued at a surprisingly rapid pace. In late 1945, he took three cruises at sea aboard the battleship USS Iowa, the heavy cruiser USS Los Angeles, and the new super-carrier, the USS Midway. As always, he loved sketching on-board scenes and painting the ship portraits during the fleet maneuvers, and while keeping up to date on the Navy’s latest technological advances.

In July of 1946, Beau was designated as the Navy’s Official Task Force Artist for "Operation Crossroads", the atomic bomb tests at Bikini Atoll in the South Pacific. From the bridge of the flagship, the USS Fall River, Beau witnessed and recorded the amazing spectacle of the two blasts from the Able and Baker bombs. The day after the Able bomb test, he set his easel up on a large buoy while working on a plein air watercolor sketch of the old battleship USS Arkansas. So close was he to the damaged and burning ship, that he had unwittingly exposed himself to a high level of radioactivity. When he returned to the flagship that evening he wrote, “I was ordered to dispose of all my garments and have a thorough scrubbing down!” to counter the effects of the overdose of radiation. The scrubbing down was painful and successful, and luckily Beau did not suffer from radiation sickness, although the Navy doctors continued to closely monitor his health for two years. While on location at Bikini, Beau made over 180 on-the-spot sketches, both in pencil and watercolor, plus 16 refined studio paintings that he created in his studio aboard the flagship. Two of the paintings depicted the now famous atomic mushroom clouds, while another captured the particularly dramatic sinking at night of the famed aircraft carrier, USS Saratoga. In the months that followed, the Bikini paintings would be exhibited in Beau’s second one man show at the Andrew Mellon West Building of the National Gallery of Art in Washington, D.C. Subsequently the show traveled to the Museum of the Science and Industry in Chicago. The public interest in these paintings was extreme and attendance exceeded 700,000, by far the largest audience of Beau’s career.

Aboard the USS St.Paul, New Zealand, 1958
In the years between1947 to 1957 Beau relaxed his pace. In 1947 he cruised to the Orient with Vice Admiral William Delany, aboard the USS St. Paul, flagship of the Seventh Fleet. There were multiple ports of call in Japan and mainland China. The visit to China came in the midst of the Communist Revolution, led by Mao Tse Tung. While in Shanghai, Beau was presented with the opportunity to study Chinese watercolor techniques found in collections of Chinese scroll paintings. He was impressed by the finesse of the ancient artists and there was an immediate and unique impact on his own technique. While visiting the embattled capital City of Beijing with Admiral Delany, he created a series of watercolor images of the Imperial Palace and the surrounding cityscapes, using some of the techniques he adapted from his studies of the scrolls.

His palette became subdued, almost serene, and his painting style became less detailed and more fluid. The influence of the Chinese watercolor style left an indelible mark on his works for the remainder of his life. Some of his most poignant and contemplative works are found in his China watercolors series are this new style is particularly evident in his paintings entitled “The Temple of Heaven” and “Calm on the Yangtze”.

Early on in the 1950s, Beau experienced two major injuries to his right hand… his painting hand. As a result, his hectic and prolific pace slowed measurably, and he was unable to accept some of the Navy’s correspondent assignments during the Korean War. 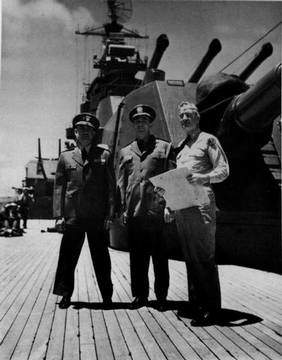 On board the USS St.Paul bound for the Orient
His most serious injury occurred while he was teaching a watercolor class in the harbor at San Pedro. One of his students asked for assistance with her work at her easel. Responding to the request, Beau stood up and left his own easel and walked over to his student easel. As he positioned himself of the student’s collapsible canvas and metal stool, it suddenly gave way. To slow his fall, he reached down with his right hand and his hand was immediately caught between the metal legs of the stool, with his full weight descending upon it. His right hand was seriously bruised in the process, and the pain was immediate. In the hospital, it was determined that his nerves had been damaged, resulting in almost total loss of motion and control. His condition persisted for more two years. Out of necessity, he taught himself to paint with his left hand, while he continued vigorous therapy on his injured hand. Using his left hand, he was able to continue his lectures and teaching. His recovery was painfully slow, but his physical therapy finally succeeded in restoring dexterity to his right hand. With this improvement he began once again to work on the many commissions that had accumulated from his collectors while he was convalescing.

During this trying period, he was still able to proceed with work on two large oil murals using his left painting arm. Oils were less challenging physically than the precision required by his watercolors technique. And he was able to work in his studio with an assistant, resting whenever he felt fatigued. Over a period of three years, he completed the two large murals. The first commission originated with the Jonathan Club, a prominent businessmen’s club in Los Angeles He was asked to recreate the historic scene of the Portuguese explorer Juan Rodriguez Cabrillo making his first landing in California on behalf of the Spanish Crown. The second of the two murals were created for the prominent Los Angeles law firm of Spray, Gould & Bowers. Significantly different in content and style from the first mural, is set in central London, with St. Paul’s Cathedral in the background and with the Inns of Court on to the left side. Beau chose to depict some 25 individual characters taken mostly from the Charles Dickens’ novel, Pickwick Papers. The mural is nearly thirty feet wide, and ten feet tall, and the characters portrayed are nearly life-sized. One of the characters represented, slightly off to the right, is a rare self-portrait of Beau, the artist adorned with beaming smile and a top hat. The mural can be found today in the collection of the Loyola Law School in Los Angeles.